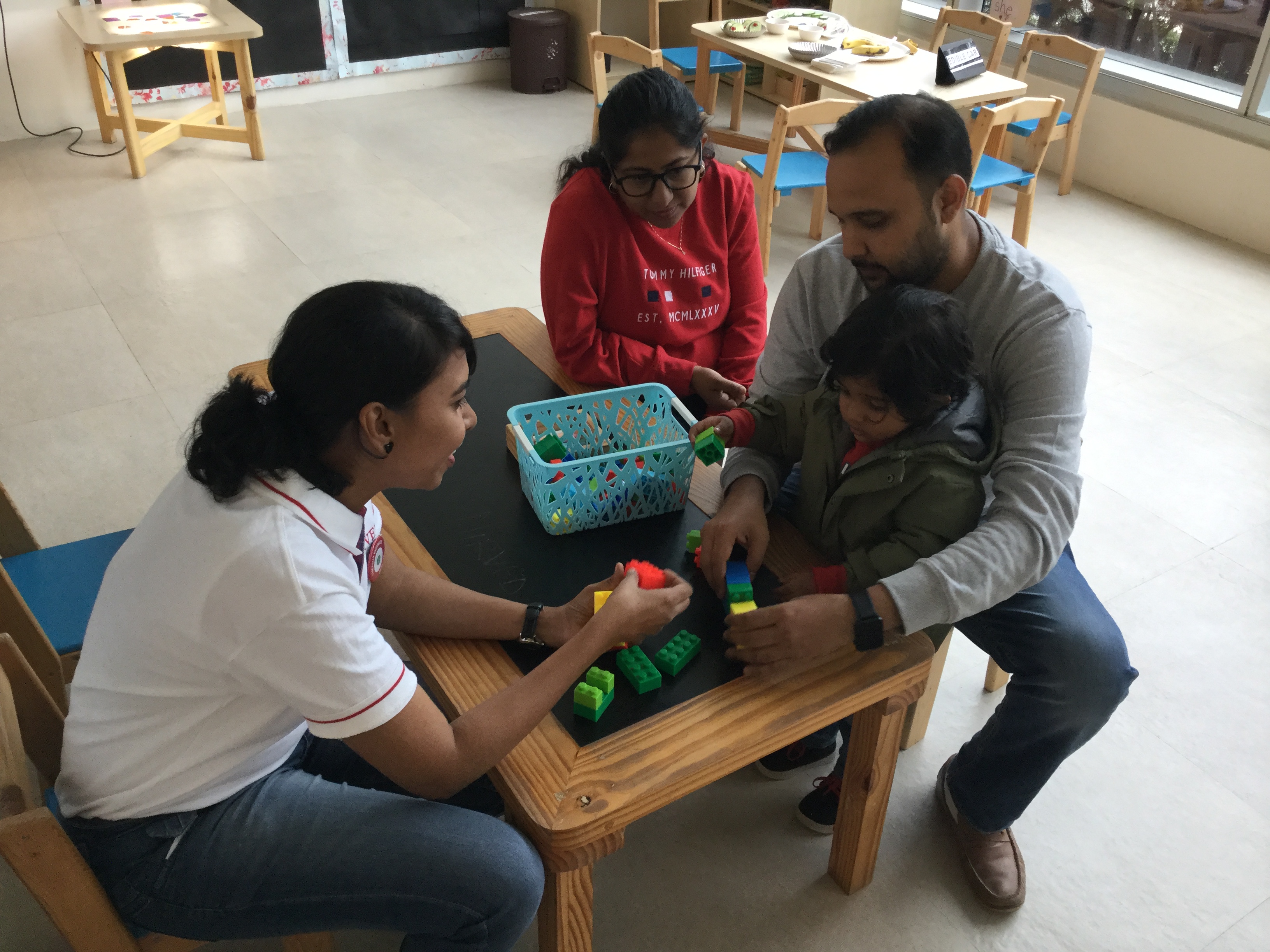 Open house event was organised on 10th Dec at Vivero GTP for existing parents and new enquiries. Parents and children had fun engaging in activities while understanding the nuances of the curriculum and the integration of 21st century initiatives. We engaged children in various activities like Trace the track, Find your way, Pattern making, Edible car which was based on the theme of Different Modes of Transport.

Christmas is the festival of sharing joy, love and peace with one another. Our children and staff had fun celebrating together by decorating the Christmas tree, cutting cake exchanging gifts. Children were engaged in activities like making Christmas tree using chart paper, Snowman and making stars using Ice cream sticks etc. It was a day full of fun and happiness. 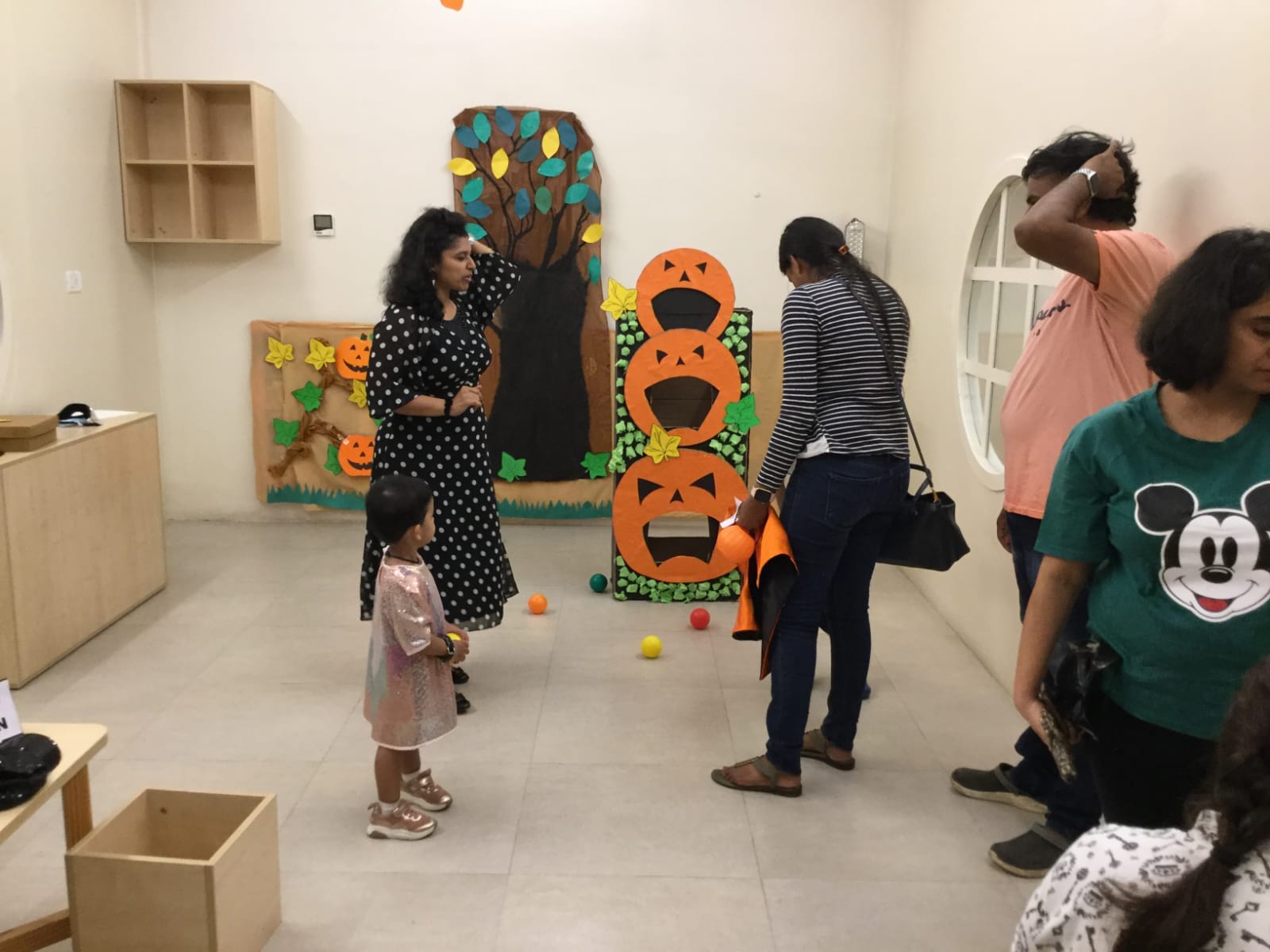 It is always fun to have celebrations at school. This time at Vivero GTP we had a Spooktacular celebration for Halloween. The team had put up amazing efforts to organize a grand event "Halloween hang-out with Boo". The event was spectacular, all our children and parents had dressed up as different characters. Everyone loved the interesting games like Aim-the-pumpkin, Feed the boo, Ring the witch hat, Witch hat decor, Golf game, trick or treat and many more Children enjoyed dancing with dem bone, tattoo art, caricature, magic show and relished the yummy treats. There was a bouncy castle for more fun and various stalls to do shopping. Parents and children were super happy and appreciated all the efforts. Wow, what an event it was!

Teachers are more than just educators who not just teach children but are also responsible for ensuring a safe and secure environment for their students at school. Being a teacher is truly a rewarding profession and it is important that all educators are prepared for any situation in school. The classroom is usually one of the safest places for a child especially when they have a facilitator with proper first aid training. We believe, with the right knowledge, they will be able to act quickly in case of an emergency. Our yearly first aid training was one such initiative to ensure our teachers know how to keep the children calm and safe during an incident. This training focussed on imparting skills which will aid in saving lives and preventive measures to reduce the occurrence of incidents. The training included teaching of the simplest instructions, the body of theories, and hands-on experience. We truly embrace our role in providing a safe, secure, and stimulating environment for our children!

A Glimpse into the learning engagements at iLearn@Vivero's Child Care Senior program.
The children have been exploring the wonders of various landforms with much enthusiasm. They have begun to understand that the earth has mountains, volcanoes and valleys. While learning about each type of landform, the students play games, take part in quizzes, share fun-facts, express themselves through graphic drawings, conduct experiments and create 3D models. They enjoy learning songs and improving their vocabulary while reading carefully selected books on the current topic.
At Vivero, we believe in a wholesome approach to learning. Through different ways of exploring a topic, children not only acquire information but are able to retain the knowledge even better. Children are easily able to make connections of their learnings with their immediate surroundings, making the knowledge applicable and fun.

On Children’s Day, we celebrate and adore the warmth and innocence present in a child. After all, they are the inevitable future of the country.
At Vivero, Children come first at all times. The image of the child is always at the centre in all that we do. This year, as we find ourselves in the middle of unfortunate times, we decided to celebrate Children’s Day with a different approach.
Children have their own thoughts, wishes and their very own dreams. Taking a cue from this, we celebrated the occasion by exploring those thoughts and wishes and added along a few surprises into them.
Our Pre-Nursery children had fun engaging themselves in different activities. Something that really brought smiles on their face was when they saw their parents pop up on the screen with a lovely message for them. They were overjoyed to receive a surprise from their own parents.
The Nursery children participated in an exciting activity - “MY WISH MY VOICE." Every child recorded a video expressing their wishes and attempted to voice their thoughts by slowly stitching sentences together. During the iLearn session, all videos were compiled and played for our parents and children. Everyone was amazed to see how delightfully the children expressed themselves. The session ended with a wonderful dance to some melodious tunes with the facilitator.
Children of K1 were taken by surprise when they saw a short recorded video made by their family members. They watched in awe as they recognized familiar faces talking about their likes and what makes him/her special. It was a beautiful experience which brought a whole lot of sparkle and happiness on the little faces.

The Pre Nursery children celebrated Onam during ilearnvirtual session along with their friends. The children spoke about their favourite Onam feast that they relished especially Payasam. The “Little Honeybees” also got to know about the story of Onam from a parent who obliged us with the incursion during the session. The session ended with an activity where children were encouraged to make a small “pookalam” with flower petals. It was a festive session indeed!

Our children enjoyed celebrating virtually the Independence Day of India a day prior on Friday, 14th August and got to know more about their country “India”. The children enthusiastically came to the virtual class in tri-colour clothes. They understood the meaning of independence, the colour of the Indian flag and learnt about some symbols of India. The children displayed their creativity by making an art piece using the tricolours of our flag. It turned out to be a fun day filled with patriotism.

Incursions are an important aspect of the educational programs offered at our school. Incursions enable children to further their learning by complementing classroom lessons.
We had an incursion on 23rd July, where our Nursery child introduced her pet to the class!! Fluffy, a Persian male pet cat! Children were amused at Fluffy's characteristics and behaviour and learnt that he ate special cat food and has different treats like us. He also has his own special house to play with a fluffy ball attached to it and a rough surface to scratch its long nails on. Thank you Fluffy for coming to our class!

In the era of modernization and westernization when most of the people are moving away from their own culture, events like Ethnic day enable the children to revive love and respect for their own culture.
Children were dressed in their traditional attires and shared their views about their culture and festivals and how they celebrate it with their family and friends. The response from the children was overwhelming. It was a delight to see their confidence, enthusiasm and active participation in each activity. The Fun Friday event was culminated by the Indian folk dance ‘Bhangra’. Our Child Care Senior children thoroughly enjoyed the session.

Vivero GTP hosted the Open House on the 25th of January. This event was an opportunity for parents to understand Vivero’s culture and ethos. Children proudly displayed their work at various stations and spoke about their journey of learning. Parents also got an insight into how we open multiple pathways of learning and prepare the children for the 21st century.

Vivero GTP hosted its first annual day on 15th Dec'2019 with full gusto. Lights...Camera...Action themed annual concert was conducted in its true sense as it was nothing short of a beautiful movie with amazing characters. All the performances were splendid and parents were amazed seeing their children on stage.

Adventure is the best way to learn, an interesting way to open up your mind and body! Our new academic year brought the celebration of our first big event open for all “Adventure Awaits”, a bagful of adventurous activities for both parents and children.
The fun-filled stations warmed up to look for riddles hidden in the sand pit, tunnels, maze and dark room. The dice game was for parents where they had to act such as hop like a bunny or walk like a crab. Our sporting parents magically ‘flew’ across the room on the magic carpet – no hands were allowed! Each of these activities were examples of important developmental aspects of early childhood and we work with our children to enhance their cognitive skills, gross and fine motor skills, control and balancing to name a few. The crowded tattoo corner was also a hit with grandparents, parents and children wanting their favourite character painted on them. At the end of the adventure, parents and children were rewarded for their efforts with the infamous chocolate fountain. On top of all that, children had endless fun on the bouncy castle.
Children and adults also explored the mystery dark room where they found the prizes which brought a smile and sense of accomplishment to each of them.

On 28th September 2019, we organised grand Navratri carnival “Nam’ Ooru Habba” which means “The Festival of our Village”. It was quite a hit and was well appreciated by our parents, children and other guests alike.
Parents & children enjoyed various activities like Rangoli making, Bangle decoration, Quiz, Dice game, Saree draping competition, Diya making, Mehandi art & Food stalls. There was a grand set up of Vaishno Devi temple which could be accessed after crawling through the tunnel.
The main attraction of the event was dandiya dance, where everyone grooved to the beats of dandiya. The Event was a magnificent celebration of Dance, Music, Culture & Food.
This event focused on how Navratri is celebrated differently in various parts of the Indian subcontinent. In the Eastern and North eastern states of India, Durga Puja is synonymous with Navratri. In the Northern and the southern states Dussehra celebrates the battle and victory of Rama over Ravana. The festival also starts the preparation of Diwali - the festival of lights. In the south Kolu is also celebrated as a part of Navratri and it has a significant connection with the agricultural and handicrafts professions in India.

Our unique Culinary Program promotes healthy eating, social skills and exposure to different cultures and cuisines. In this activity children learned the names of the vegetables and were allowed to be creative/experimental with the ingredients.