The advent of autumn marks the beginning of grand festive season in India. Vivero International Preschool and Childcare, Sarjapur went into celebration mode with the “Nam Ooru Habba” carnival. The entire School displayed grandeur in every corner with the depiction of four different forms of Dussehra celebrated across India namely the Dussehra from the North, Navratri from the West, Durga Puja from the East and Golu of the South.
The mighty Ravana trying to guard his burning Lanka glorified the Traffic Park. The entire set up around depicted the flavors of Gujarat and Navratri with the Bandhni décor and colorful pots. The grandeur of the Golu set up was something to be proud of as it depicted the Dasara procession of Mysuru and the six seasons (ritus) along with the beautiful Golu dolls arrangement. The Durga Puja pandal set up solemnized the true Bengali culture and festivity.
The highlight of the celebration was the Kathputli Naach (Puppet show) along with the Rajasthani song, Dhol and the Puppet Horse. The crowd was completely soaked in the fiesta and danced to the beats of the Dhol.
The teachers took the celebration to another level as they all rejoiced with a grand Garba performance. A devotional dance depicting the prominent dance ritual in the form of “Dhunuchi naach” performed during Durga Puja was presented by the teachers. It was culminated with the blowing off the “Shank (Conch Shell)”, ringing the bells and the trademark “ulu dhwani” followed by the Sindoor Khela.
What’s festival without shopping and good food? There were numerous shopping stalls including clothing, jewelry, essential oils, fish tanks and plants. The people loved feasting on the traditional Indian street food like pani puri, different varieties of chat, Gujrati delicacy snacks and Ice creams. The public tambola got the crowd going as they won some exciting prizes.
The event exemplified how one festival is celebrated in four different ways representing the rich culture and heritage of our country.

The school as a community took a small step to bring smiles to the faces of others as we celebrated ‘Joy of Giving’ at school.
Parents were requested to contribute dry ration, toiletries etc. for the noble cause. The collection was given to Jyoti Seva School for Visually Impaired. We express our heartiest gratitude to all the parents for their generous contributions. Because it is rightly said “Joy of Living” is in “Joy of Giving”!

The special bond between grandchildren and grandparents’ was celebrated with a profound celebration wherein children teamed up with their grandparents for fun games and activities.

From the first day of school to the 100th day, it has been a tremendously interesting and evolving journey for our children at Vivero. Our 100 days journey though began with tears were later were filled with laughter, fun, new friendships and different ways of learning. We celebrated our 100th day in Vivero with lots of fun and excitement as Vivero turned into an inevitable part of our children’s life.

“To truly live, celebrate each day of Life. Let each day be a festival of Joy!”
Another exciting month just went by with our most awaited celebration of learning in the form of Culmination.
For the culmination of Unit 2, PN and Nursery children amazed their parents as they showcased their learning through PPT and videos. Also, K1 and K2 children had put a stupendous show and presented their learning in the form of drama, music and dance in front of their parents.
All the children did us proud with their hard work, dedication and amazing performances which made the culmination event an extremely memorable one.

Our new academic year brought the celebration of our first event “Adventure Awaits”, an exciting affair with bagful of adventurous surprises for both children and their parents.
The captivating stations – Maze, Gaming zone, Jungle escapade, Bivouac and Mystery room etc. filled our children with zeal and enthusiasm and gave all the parents a chance to reconnect with their inner child. Children and adults were thrilled to pass through the network of twists and turns and find their way out of the maze. Programming ‘Cubetto’ to score a goal on the football field or sending ‘Dash’ to save the building on fire added excitement for our children. Children along with their parents loved exploring the Twister Jungle trail, Tunnel obstacle course, The Mystery Dark room and winning scratch cards to win prizes certainly brought smile and a sense of accomplishment to each one of them.
The army themed photo-booth added pride to the event with its meaningful title of “Live a Life Less Ordinary”. This memorable experience put together by extremely dedicated, hardworking and creative team of Vivero Sarjapur, had more than 350 people gracing the event.
A big thank you to our enthusiastic and super supportive parents for making this event a phenomenal success.
Our 'Back to school' event has set the beginning of a wonderful journey with a promise of many more delightful events throughout the year!!

Dash and Cubetto were the major attraction of the event “Adventure awaits”. As 21st century learners, our children are well versed with latest technological advancement. Leaning through Cubetto and Dash made our children acquainted to basic programming and coding.
Our Children came up with innovative ideas to use Cubetto, as a football player,to score a goal by placing the right keys on the console.
Children dressed Dash the robot as fire fighter who had to rescue people from a building by manoeuvring through the roads without going off-road using the Go App.
Children explained the rules of the games to the participants and assisted them to score the goal. Parents and children thoroughly enjoyed playing these games. 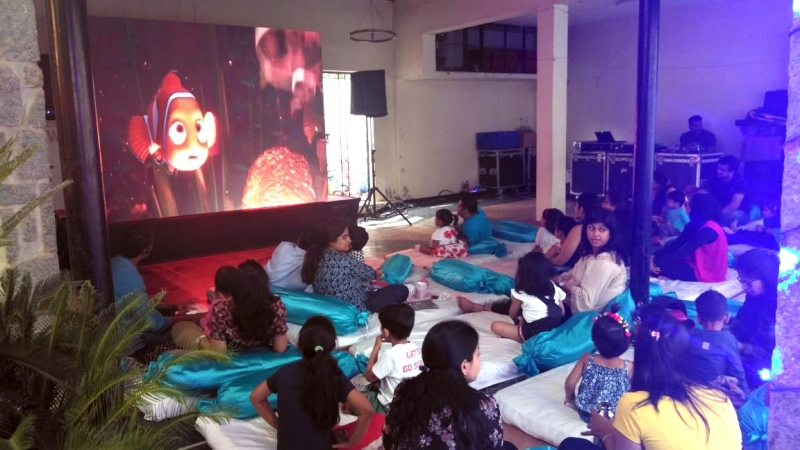 Entertainment, relaxation & family-time found a new address on Saturday,16th of March, 2019 at Vivero International Preschool and Childcare, Sarjapur. The event was a special arrangement for our little ones as they watched "Finding Nemo" along with their parents in a cosy set up. It was indeed a 'movie experience' like no other in front of a giant LED along with its Dolby surround sound system that brought about a genuine feel of the movie theatre, while vibrant awe-inspiring colours from the screen lit up the area. The warm, buttery smell of popcorn further added on to the exciting ambience.
The entire school was decorated with bits and pieces of the theme from the movie. The highlight, of course, was the magical underwater world entrance as every guest marvelled with sheer amazement. Every decoration on display proudly showcased the ingenuity and joy of the children's work. A hi-tech ticket counter with its curious paperless QR code scanner saw some unforgettably priceless expressions from children and parents alike. Apart from this, theme-based activities and gaming stations drew a lot of attention and kept everyone happily engaged before and after the main screening. Children not only succeeded in 'Finding Nemo' at the end but also created wonderful memories as they watched their parents relive their childhood through the event. 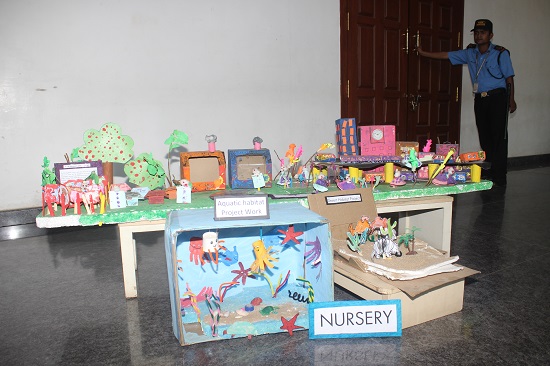 Annual Day is something each one of us including children, parents and teachers look forward to. Planning for the event begins much in advance to ensure superb performances by each and every child. The thought behind the Annual Day celebrations is to provide a wonderful platform for children to showcase their performances with confidence to a large audience. The Art Exhibition gives the parents an insight into the effort put in by the teachers to make learning fun for the children.
Planning for the event began in November 2016, with much enthusiasm. After several discussions we narrowed down on the theme based on the five elements of nature. A brief plan was laid out to include skits performed by K1 and K2 children, and dance performances by our Pre-nursery, Nursery, Childcare and EPS children. We eagerly started preparing for the event.Shortlisting the songs, script writing for the skits, planning the props, etc. was undertaken with lot of passion. Soon regular practice sessions for the big day were being conducted in all classes.
Staying true to our philosophy of ‘Partnering with Parents’, like the previous year, this year too we decided to include a performance by our K2 parents. On PTM day in January 2017,we discussed the plan with the K2 parents. They were thrilled at the idea and soon began designing the skit with some help from K2 teachers and their children.
We chose the auditorium at New Horizon Engineering College as the venue for the big day and soon the day arrived. Children dressed in their colourful attire reached school all eagerto showcase their performance on stage. At the venue, parents walked through the Art Exhibition with some yummy snacks, as they enthusiastically waited for the program to begin.
Our vivacious anchor for the evening, Ms. Ameeta Pandya, welcomed the guests and the much awaited event began. We started the affair with a speech by our Guest of Honour Ms. Bina Bakshi and the School Head’s report. The performances by children opened with the Welcome song by our K1 children followed by dances by our Childcare toddler group and Pre-nursery groups.
To ensure that most guests are present during the felicitation ceremony of our graduating K2 children, we conducted this immediately after the Pre-nursery performances. Our K2 children were thrilled to receive their graduation certificated from Ms. Bina Bakshi.
As the evening progressed children excitedly put forth their performances, dances by the Nursery children and some amazing skits along with dances were performed by the K1 and K2 children. This year also the K2 skit was written by the children.
The highlight of the evening was the wonderful 10 minute skit by our passionate K2 parents, setting very high standards for the next few years. The hard work and hours & days of dedicated practice put in by the parents was evident from the performance. The script involved lot of inputs from their children, including the dance steps.
The program ended on a high note with a song by our graduating K2 children. It was a fun-filled event with some fantastic performances by children and parents alike. 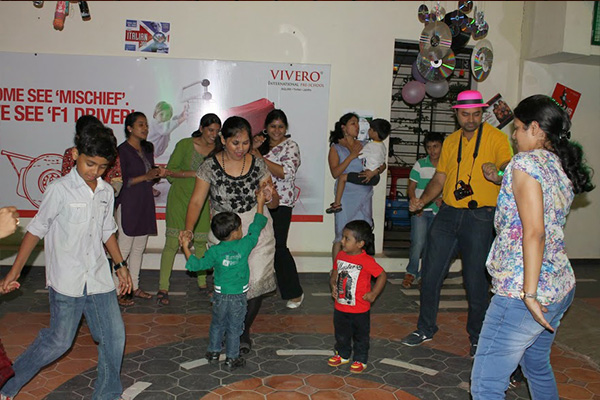